Platinum Trimming has a resident Kombi – ‘Henry’. He is a 1974 Australian poptop – I’m not sure of the conversion but he is most likely a Sopru or Trakka. He was purchased in June 2008and is undergoing a transformation that will eventually be a full restoration. 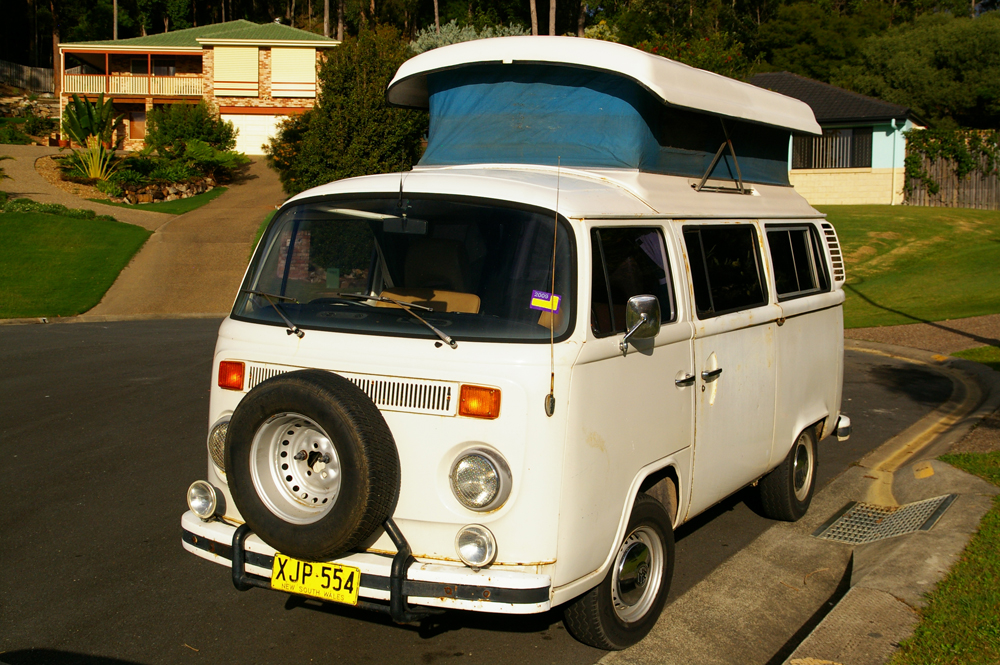 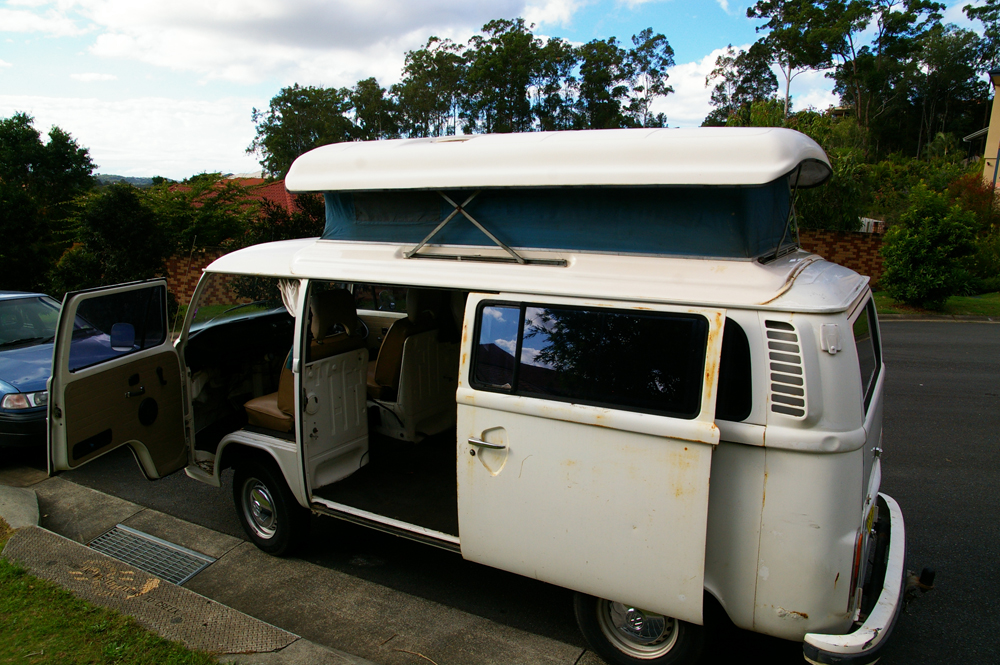 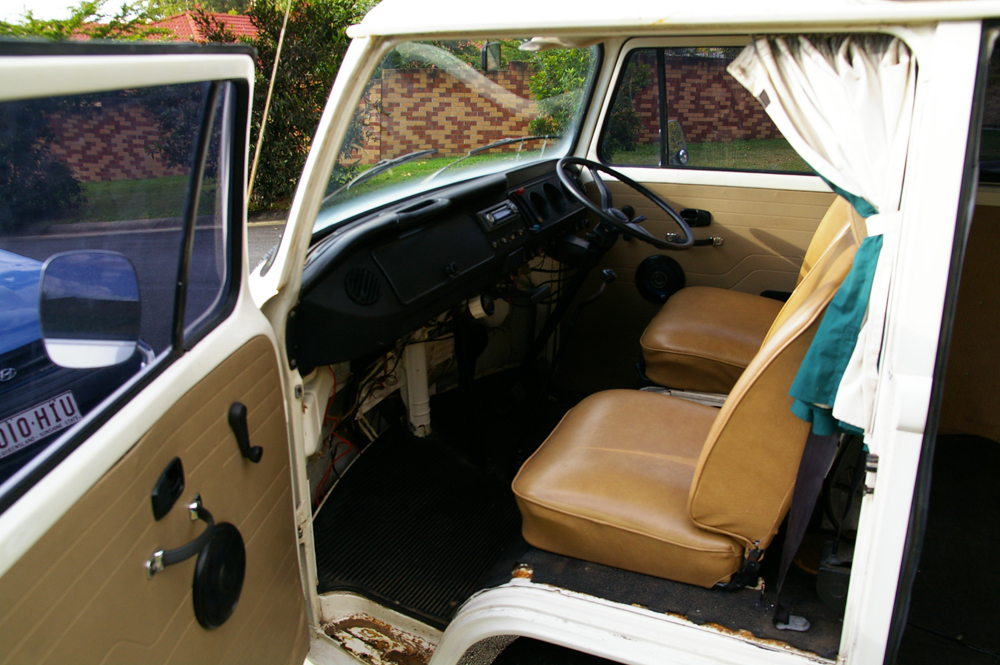 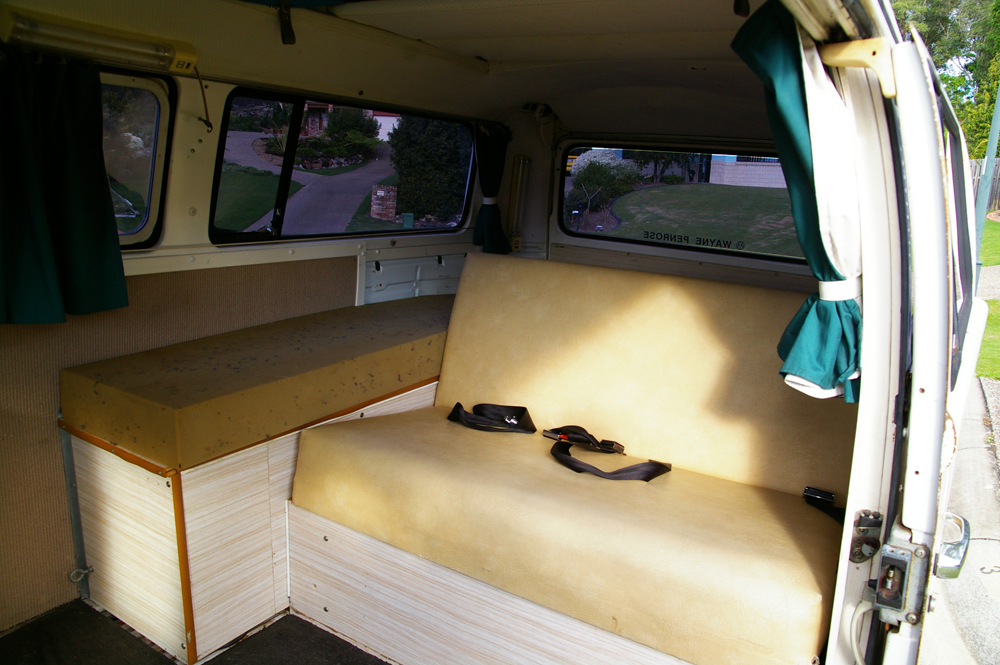 Up until now we have used Henry as nature intended, for camping!  Tracieand I have had lots of fun in our camper but he definitely needs a little tidying up.  I decided to start with the front seats, the old seats are not the greatest so I found a pair from a Mazda Eunos 30X which look greatand are really comfy.  They also are quite low to the floor which is good as there is not much head room in these Kombis.  To top it off I have also fitted a swivel base to the passengers side, this is a great accessoryand really creates a lot more space when camping. 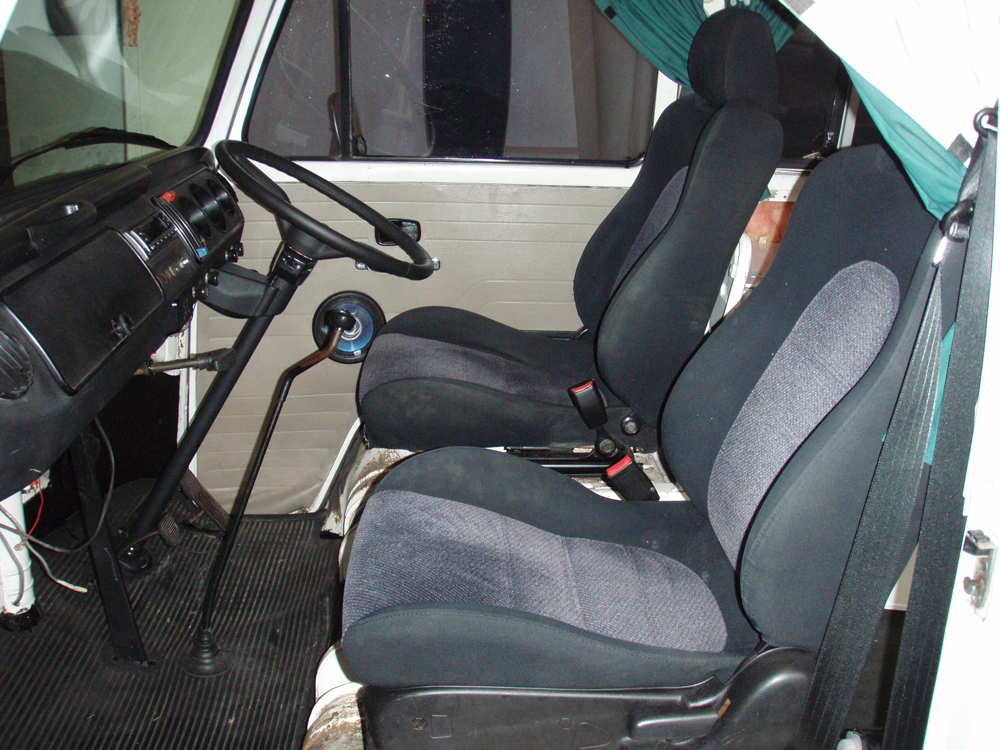 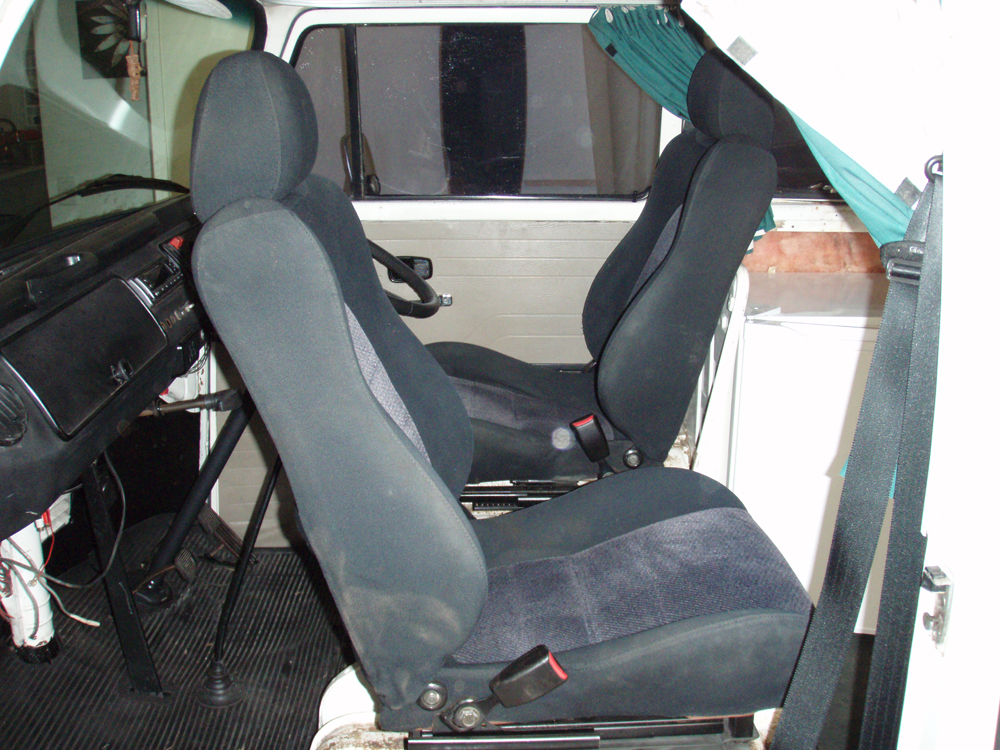 The R&R bed in the rear is a bit oldand rickety, so to fix it up I remove the whole lotand refurbish the mechanism with new boltsand washers. Next all the timber is replaced, they have used cheap particle board – which doesn’t hold up well with moisture, so I have replaced it with 17mm plywood. The foam is well past its use by date so I have fitted new higher density foam on the bottom with a layer of softer foam on top. The covers are made with Warwick fabrics ‘Tetra’ – cloth. Much more comfortable when camping, vinyl can get a bit sticky, especially in Queensland! 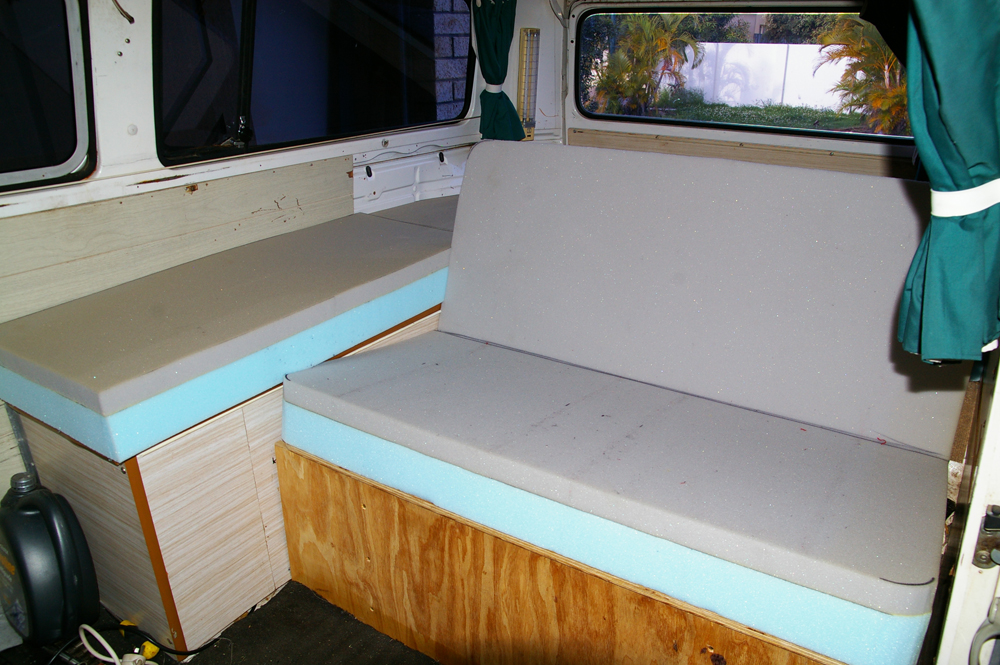 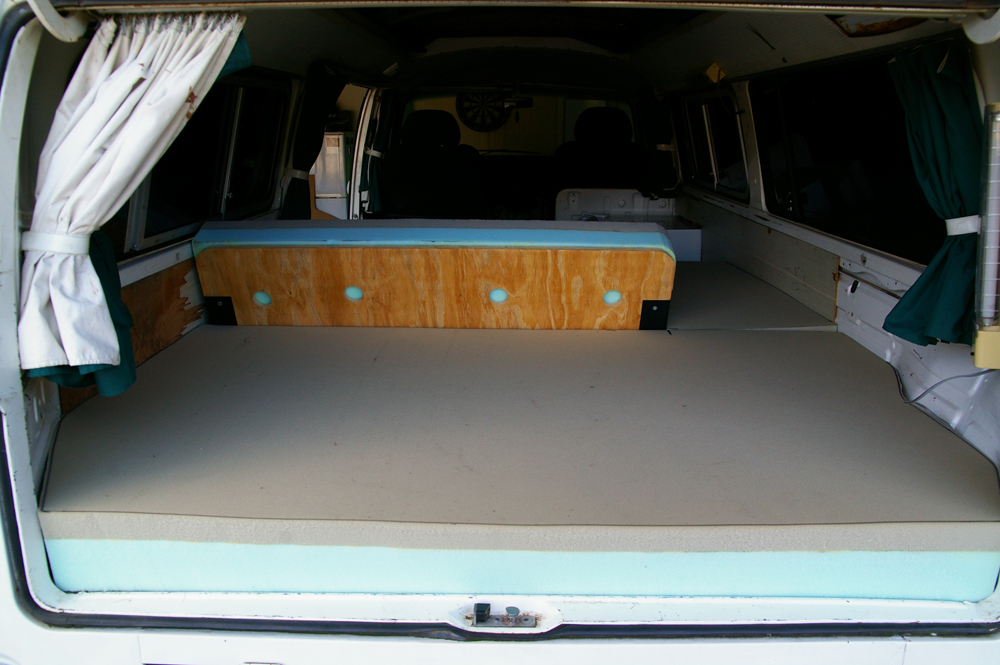 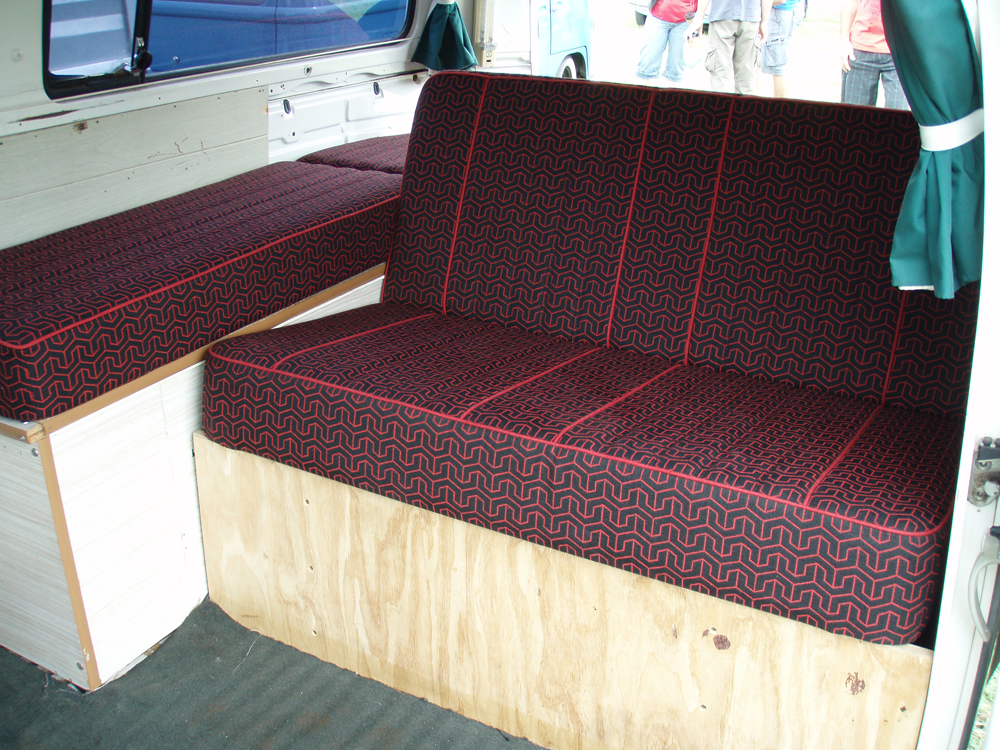 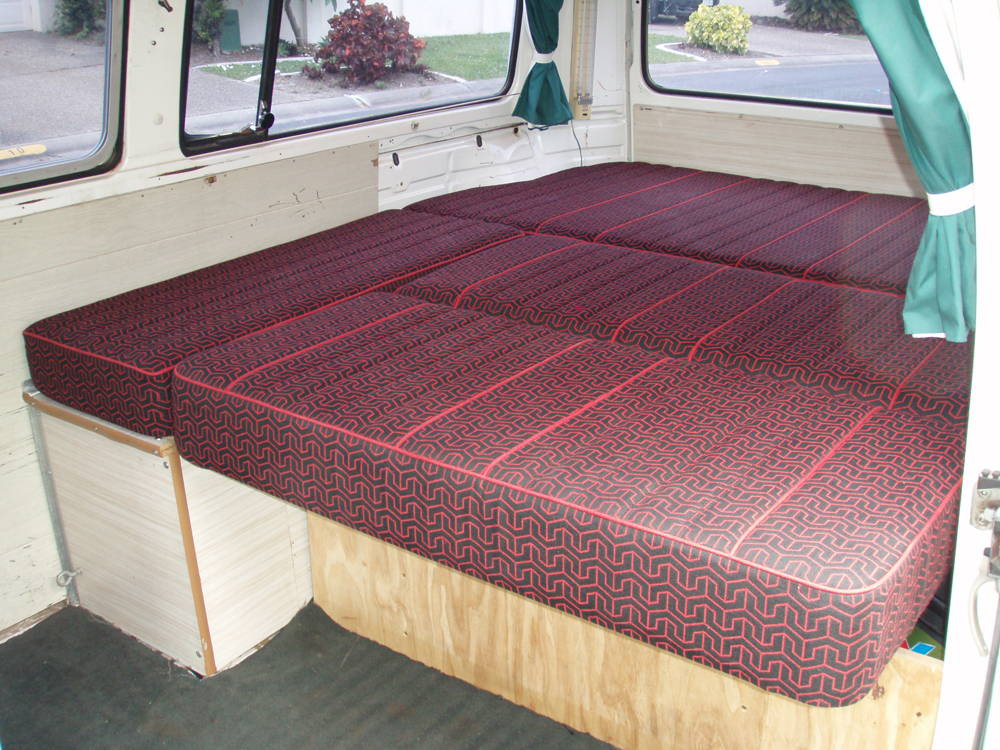 Henry’s motor actually runs like a charm already, only problem is he leaks oil like a champ! My friend Charlie is a real ace VW mechanicand he took on the job to rebuild the motor. So it was removed, stripped completely, cleaned, measuredand fully rebuilt with new seals, rings, gaskets, bearings, reconditioned cylinder heads, new ‘warm’ camshaft, electronic ignitionand fuel pump. It was also fully detailedand repainted for its return to the engine bay – which was also cleanedand repainted black. I have also had the brakes reconditioned all round – new discsand machined drums on the rear, new slave cylindersand master cylinder. 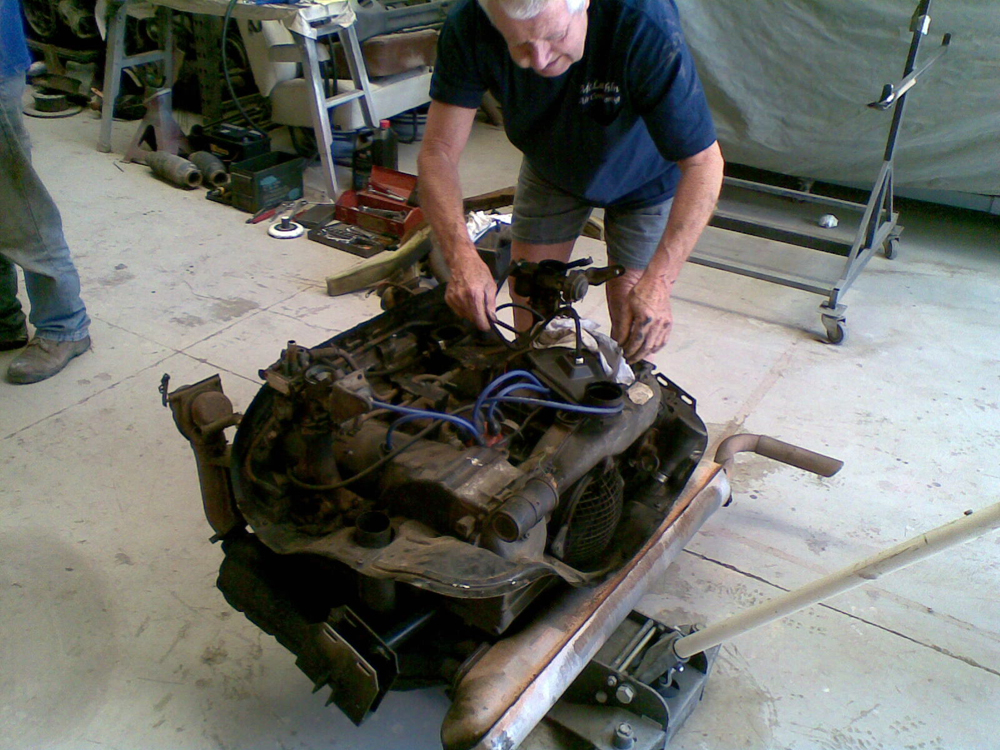 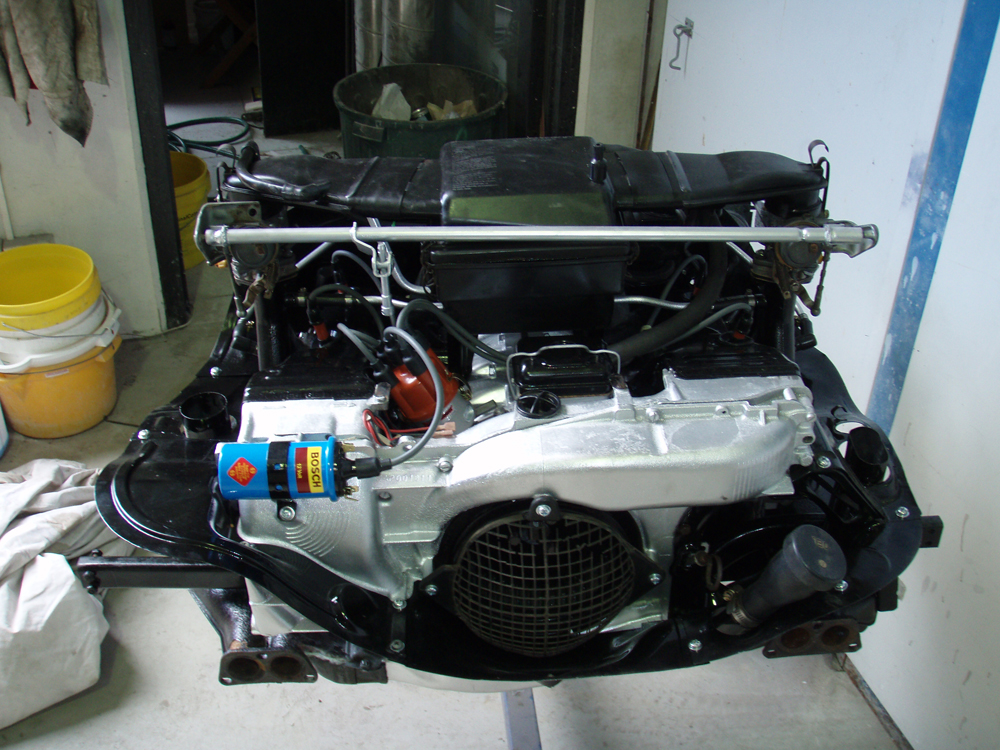 Next on the list, the steering wheel needs some attention. Like a lot of old kombi steering wheels Henry’s has cracked around the horn buttonand it also leaves a black smear on your hands when driving. A good way to fix this is to wrap it in leather, I have also done the spokesand horn button with leather too. Much more comfortable to drive. At the same time the steering box was replaced with a good second hand one. 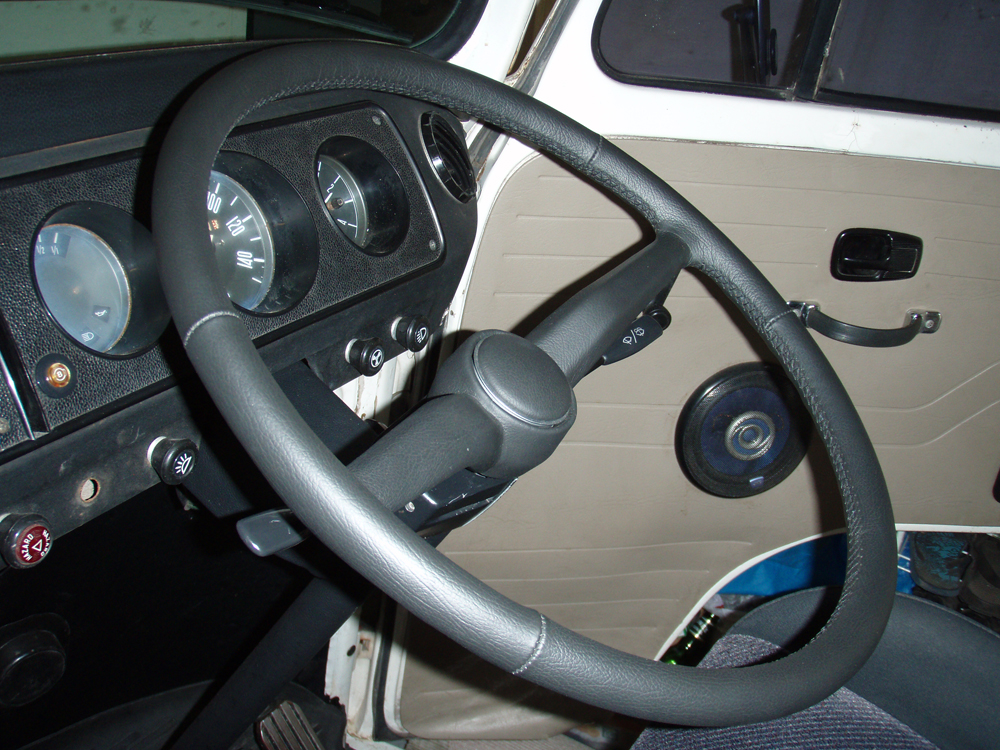 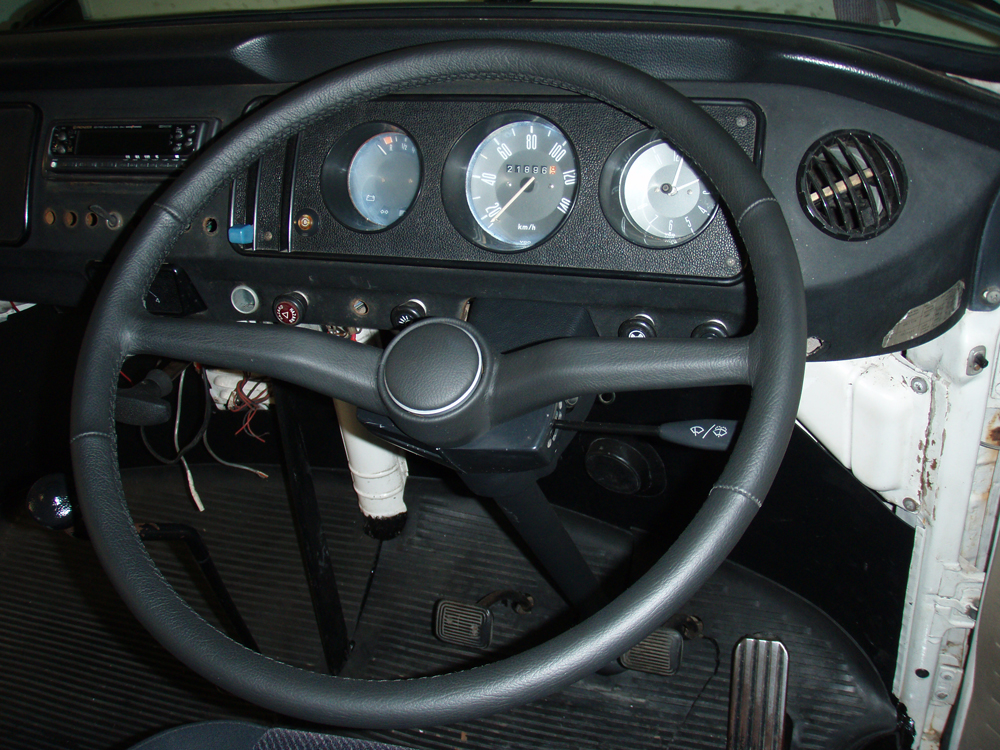 This stage actually took six months, starting with the rear side panels – which are finished in red/black synthetic leather-type vinyl, the red having deep twin needle stitched diagonal pleatsand black piping. Fast forward a few monthsand after fitting the electric windows to the front doors, I could make the front door panels. With all the panels complete it was time to refurbish the front seats. They have been re-covered in full grain red leather, with deep twin needle pleated inserts in perforated red leatherand black leather piping. The layout of the seat covers has been re-designed for a better look. Finishing off stage two trim with new red carpet on front/rear floors. 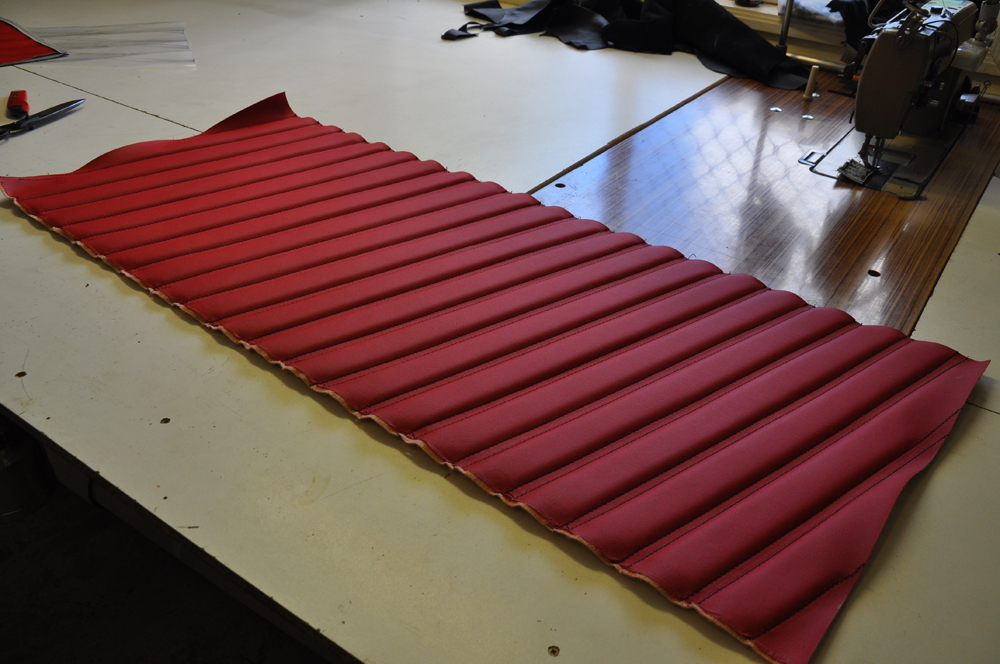 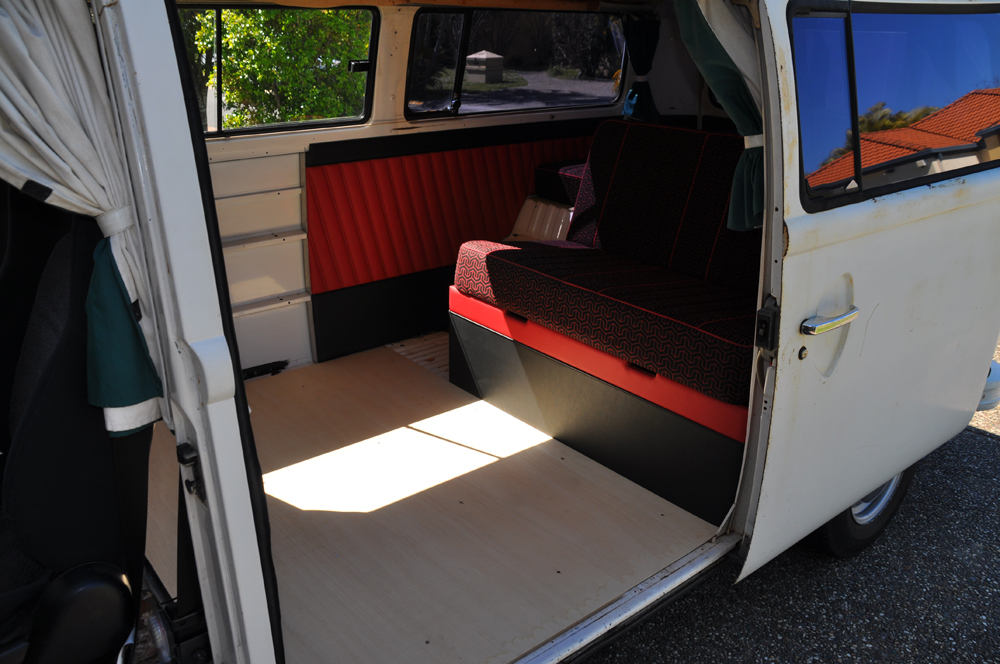 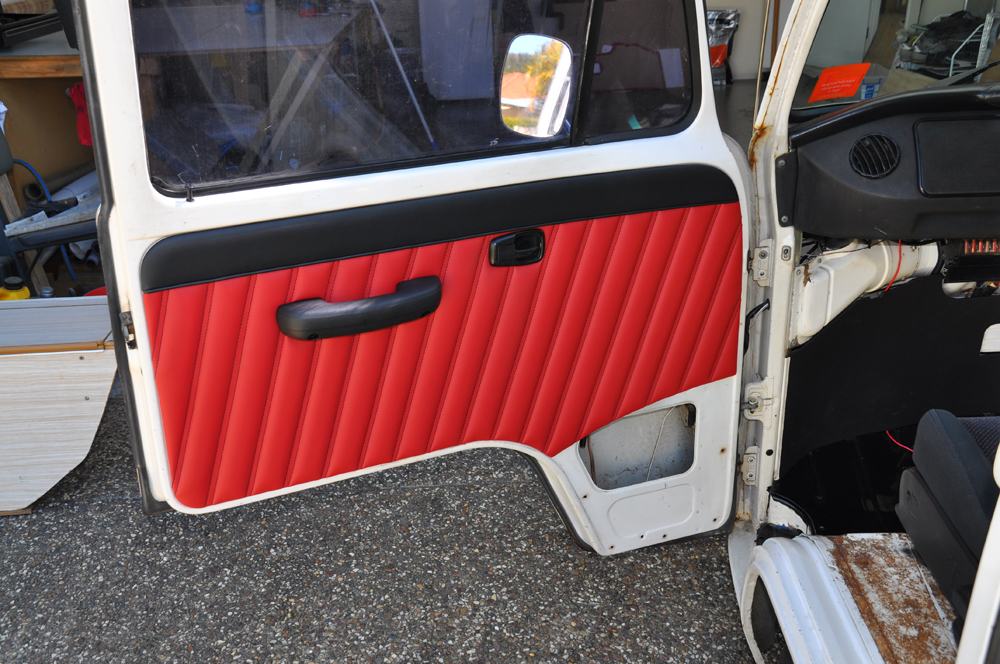 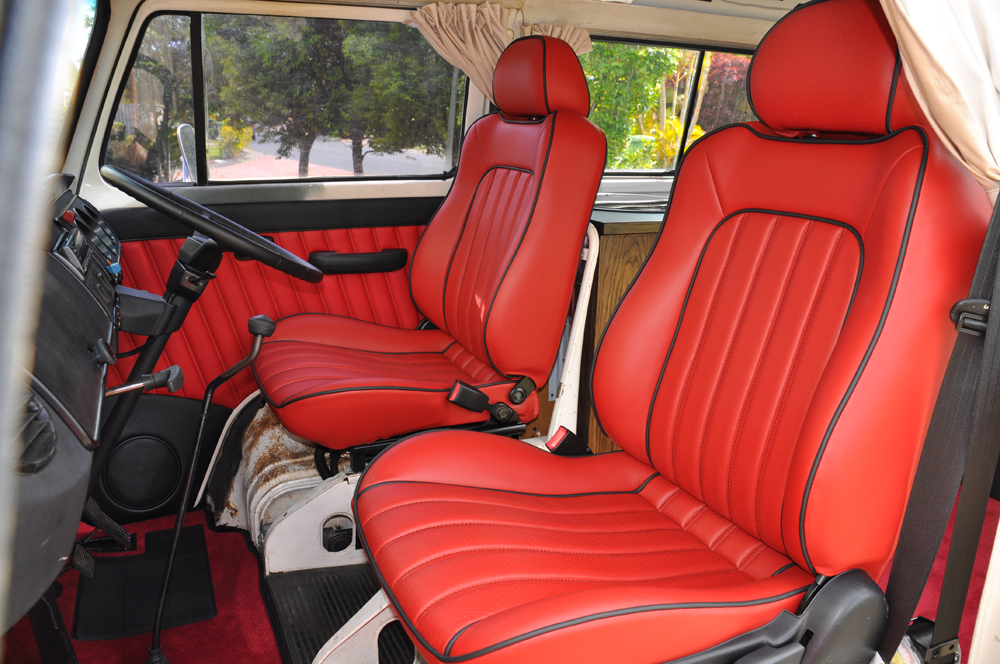 I’m a big fan of musicand good quality sounds, so naturally I had planned to squeeze a subwoofer in somewhere, as well as good quality front speakers. I chose the following setup: JBL P660C Power Series component front speakers, JBL P662S Power Series shallow mount 2 way rear speakers, Alpine SWRT-10 10″ shallow subwoofer, Infinity Kappa Four power amplifier. At this stage I still have an old Pioneer head unit, that has auxilary input for the iPod, but will upgrade when funds allow. There was enough room behind the drivers seat for my sub – after I cut a hole in the bulkhead to pass the box through to the back of the cabinet.

The custom made front speaker pods direct the sounds more towards the earsand I have flush-mounted the tweeters in the top of the dash to bounce the sound off the windscreen. The amplifier runs the front speakersand suband has a cutoff switch under the dash so I can disable it when camping to preserve the battery power. The rear speakers are mounted in my custom over head shelfand run directly from the head unit. 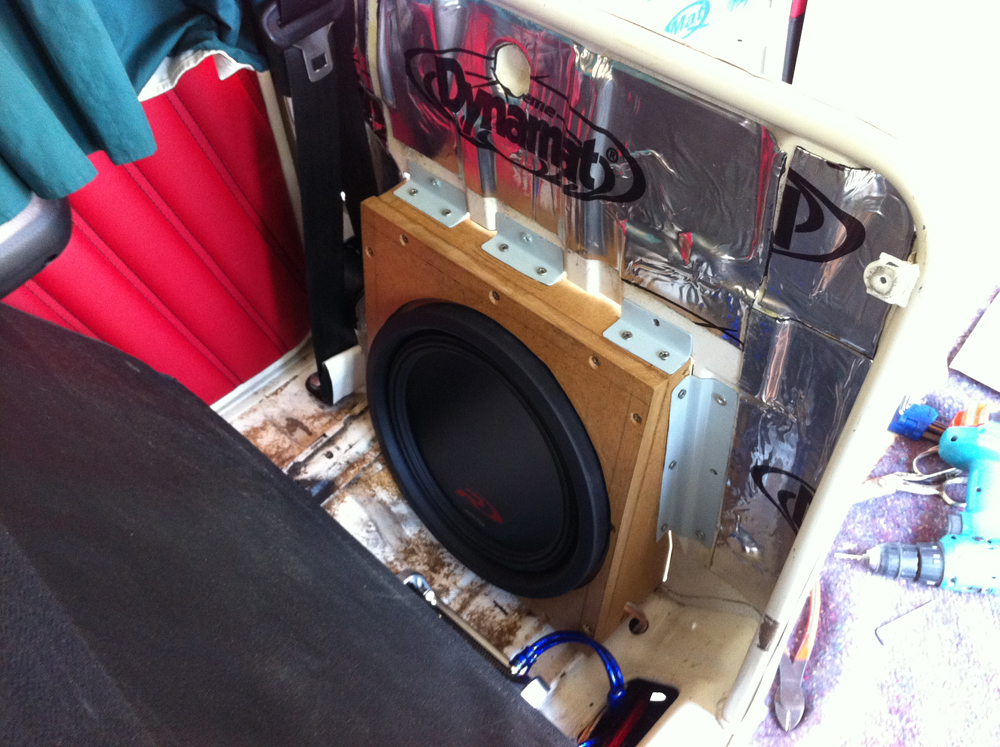 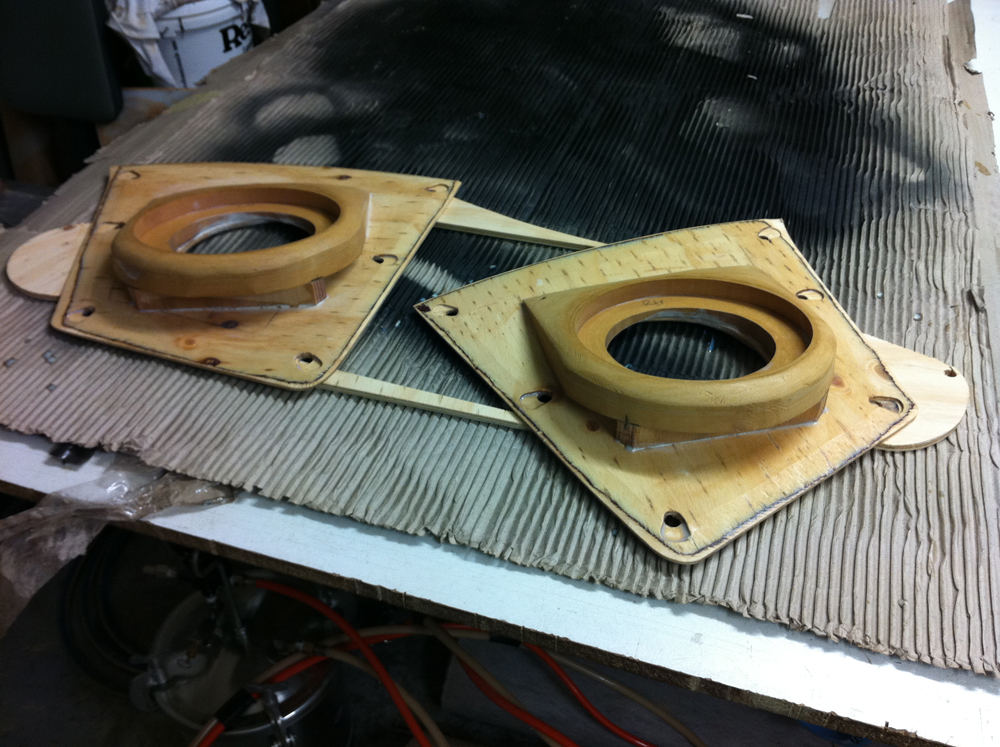 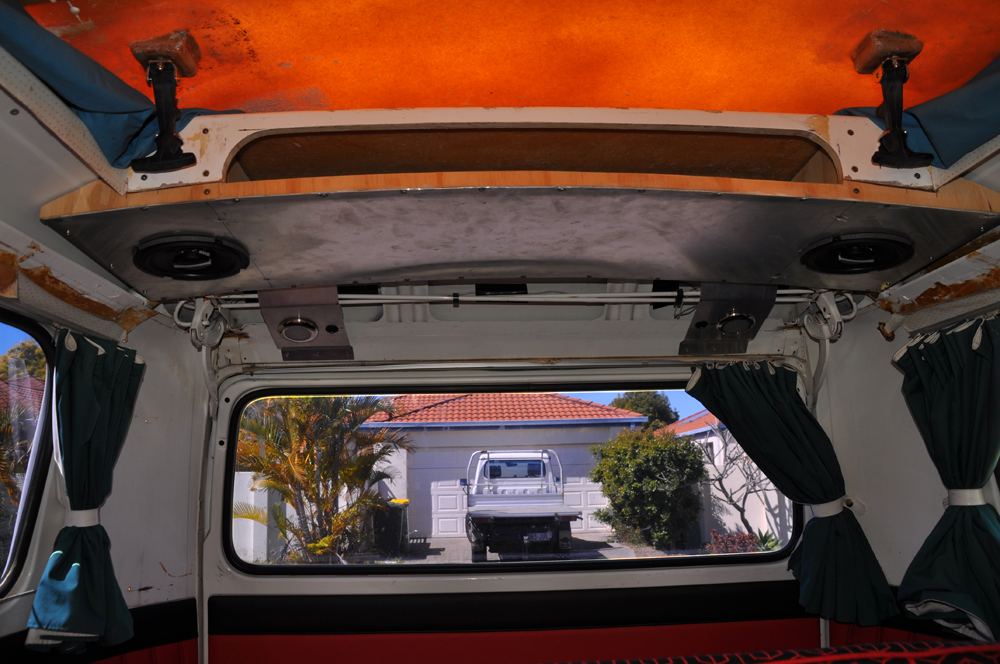 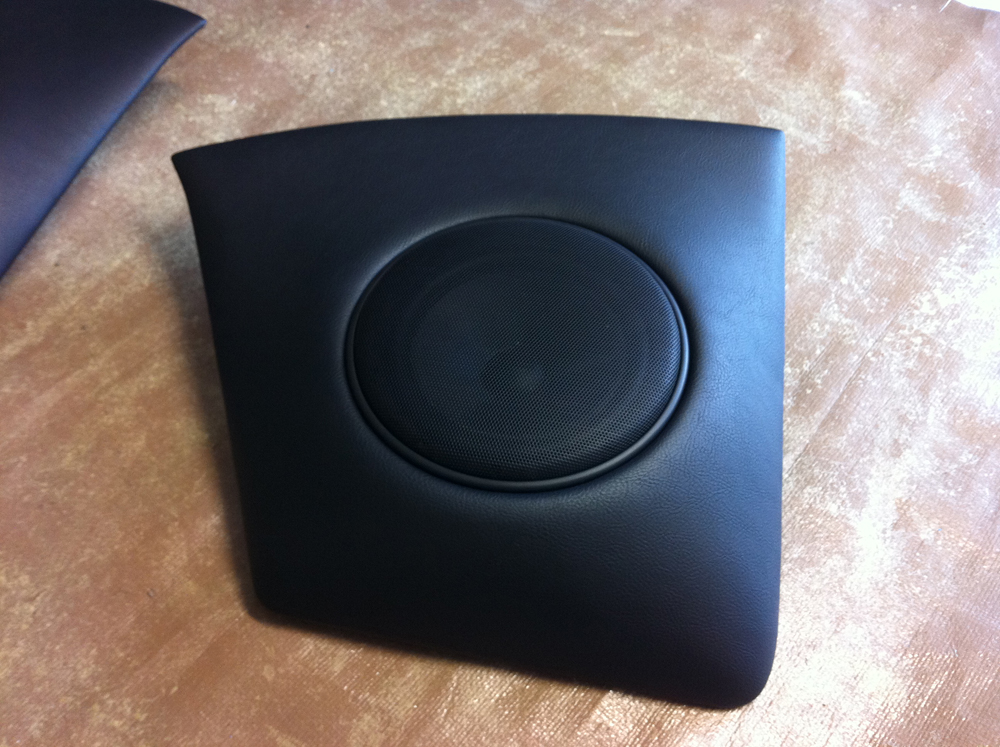 I have bought a new 12v fridge – 65Land it is to be housed behind a cupboard door within the new cabinet. Tony the Cabinet Maker Man has done a fantastic job hereand the unit looks awesome. It is made from light weight 12mm marine ply with an American Oak real timber veneer. The bench top is black laminex with a solid timber edging in American Oak. Once it was completed, I then disassembled it to coat it all in dark stain, followed by a few coats of Danish Oil. There is a cupboard on the right hand sideand a cutlery drawer above. Also above the fridge is a new Dometic sink with fold down glass lid. This will be connected to an under floor water tankand fed via a 12v pump – it’s on the to do list! Tony also made the under-bed cupboard directly behind the main cupboard, this one has a trim panel on the sideand black laminex top. 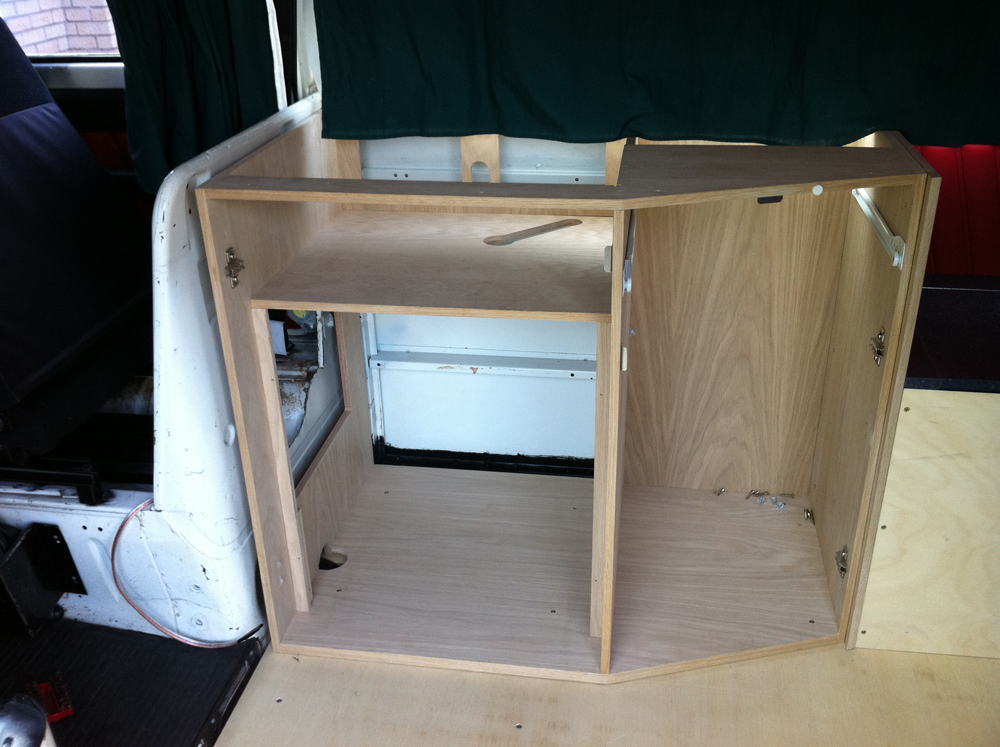 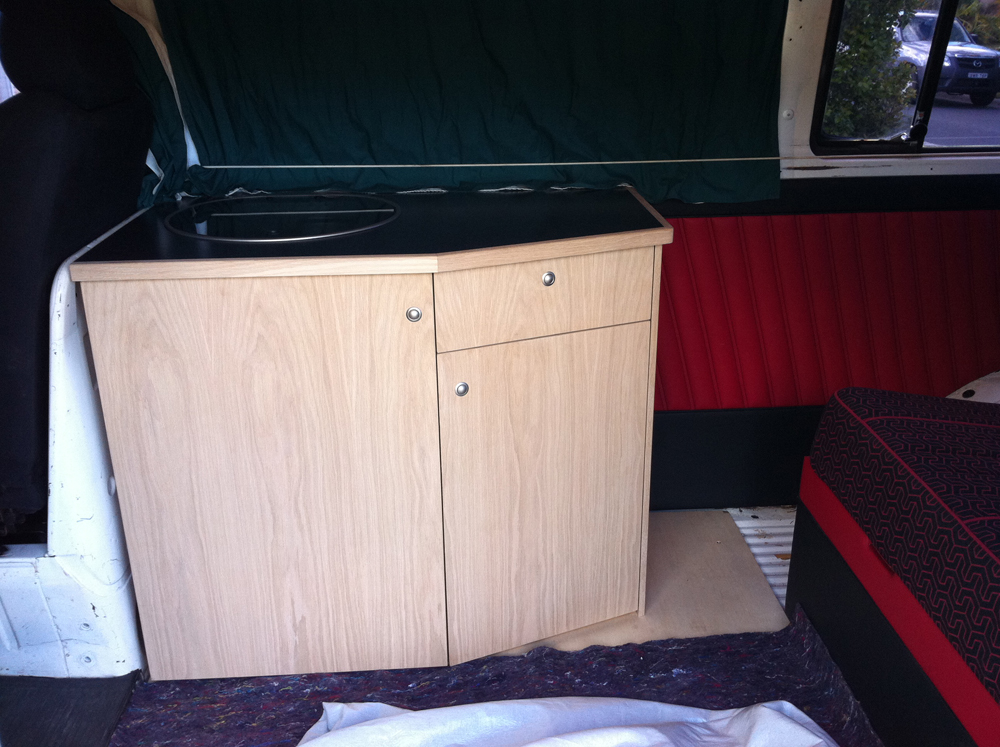 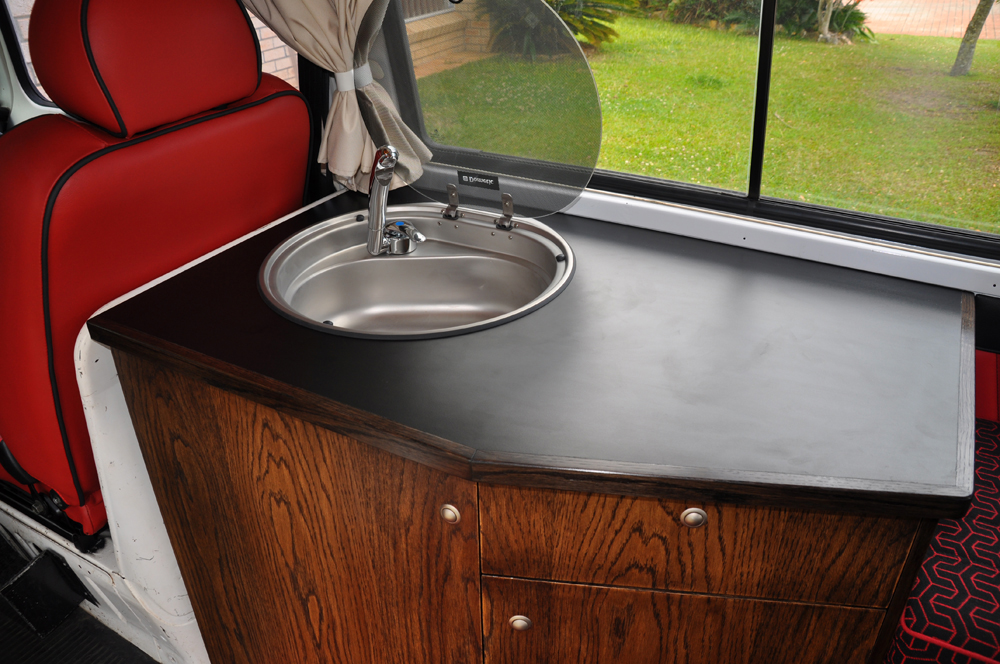 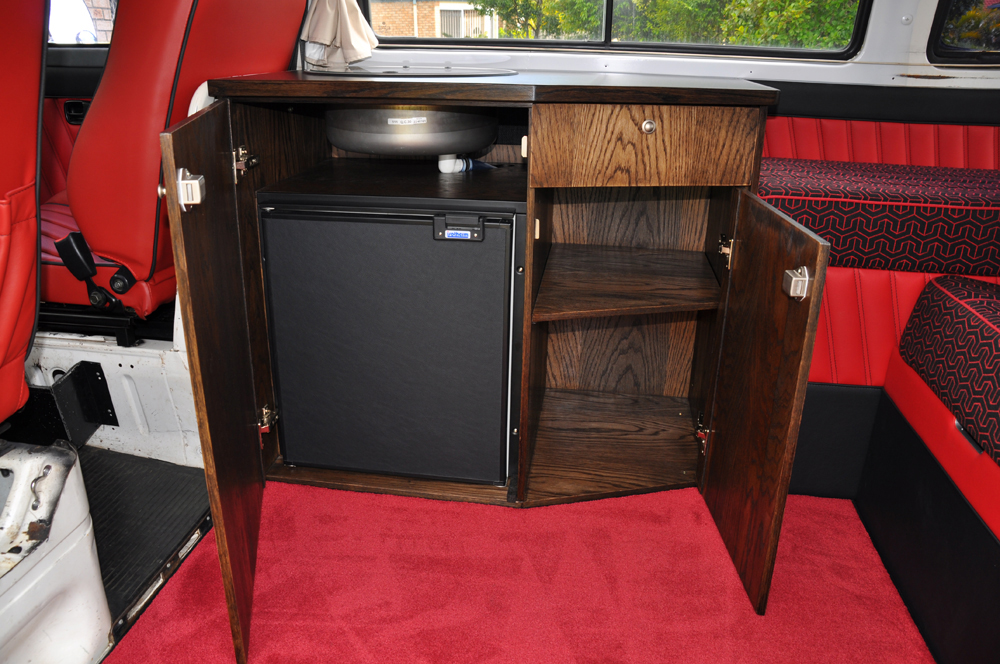